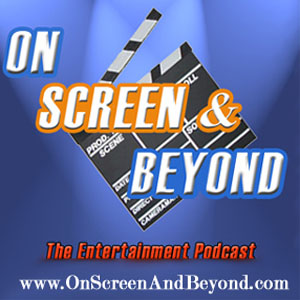 Pick of the month

Life With Lucy: The Complete Series

This week's guest on On Screen & Beyond:

Daphne Maxwell Reid stops by to talk about the upcoming HBO MAX reunion Special of the cast of "The Fresh Prince of Bel Air"! Daphne shares memories of the show as well as some of the other shows she has worked on over the years! She also talks about her upcoming Christmas movie on BET called "The Business of Christmas"! Plus we check out "Super Intelligence", "Ollie" and more, on this week's On Screen & Beyond! Click here to listen to Episode #524 with Daphne or go to itunes to download there also!

Carly Hughes of "American Housewife" joins us this week to talk about her career, being on stage on Broadway and her upcoming Holiday movie on Lifetime, November 15 at 8 pm, called "The Christmas Edition"! She also talks about working with Marie Osmond on the film and much, much more! Plus we check out "Free Guy", "The Nutty Professor" and more, on this week's On Screen & Beyond! Click here to listen to Episode #523 with Carly or go to itunes to download there also!

Kellie Shanygne Williams grew up before our eyes on the hit show "Family Matters"! Kellie joins us to talk about her role as Laura Winslow on that show. We also talk about Kellie's new Holiday movie, "Christmas In Carolina" streaming our way starting November 1st. It's time to get into the spirit with a fun movie! Plus we check out "Meg 2", "Spaceman Of Bohemia" and more, on this week's On Screen & Beyond! Click here to listen to Episode #522 with Kellie or go to itunes to download there also!

Victoria Rowell is a none stop actress, dancer, producer and more! She joins us and tells us stories of her early years growing up in Maine, working with the amazing Dick Van Dyke, the kindness of Jim Carey and that's just for starters! Victoria has several projects coming our way on BET HER including the shorts "Like, Comment, Subscribe" and "A Long Look In The Mirror". Two dramatic works she appears in, coming on October 17! She also directed the BET HER movie "Everything is Fine" and look for her on "Trash vs Treasure" and "The Rich and the Ruthless"! Of course, you can also catch her on reruns of "Diagnosis Murder, too! Plus we check out "My Son", "Ant Man 3" and more, on this week's On Screen & Beyond! Click here to listen to Episode #521 with Victoria or go to itunes to download there also!

Pat Carroll is known for many roles, but will forever be known for her voice-over roll of Ursula in Disney's classic, "The Little Mermaid"! Pat talks about that role and many of the legendary actors she worked with over the years. On Saturday, October 10 at 1 pm PST, Pat will be inducted into the Voice-over Actors Hall of Fame and you are invited! It will be a free online event with guests Leonard Maltin, Tara Strong, Debi Derryberry and more! Don't miss it! Plus we check out "Spa Day", "Lockdown" and more, on this week's On Screen & Beyond! Click here to listen to Episode #520 with Pat or go to itunes to download there also!

Legendary voice-over actor, Jim Cummings drops by OSB to chat with Brian about his career voicing such notable characters as Winnie The Pooh, Darkwing Duck, Hondo Ohnaka, Zummi Gummi, Bonkers and so many others! On Saturday, October 10 at 1 pm PST, Jim will be inducted into the Voice-over Actors Hall of Fame an you are invited! It will be free online event with guests Leonard Maltin, Tara Strong, Debi Derryberry and more! Don't miss it! ! Plus we check out "Old", "Firestarter" and more, on this week's On Screen & Beyond! Click here to listen to Episode #519 with Jim or go to itunes to download there also!

What countries do the On Screen & Beyond listeners come from?

Here is a map of the world and the countries in white all have loyal OSB listeners! Everyday, around the world, people are tuning in to hear the fascinating guests here at On Screen & Beyond! If we missed you, let us know and we will add your country to the list! Keep on listening and share with a friend!

Check out our past interview with Gameshow legend Bob Barker

Click here or on the pictures below to hear our past interview with Bob!

Past "On Screen & Beyond" Guests

Each week, On Screen & Beyond brings you an interview with a person from the movie, TV or music industry as well as information on upcoming movies, sequels, remakes and DVD releases. Check out past guests on "On Screen & Beyond" by going to our "OSB SHOW RERUNS" page. There you'll find interviews with your favorite stars, directors and musicians, including Oscar, Emmy and Golden Globe winners and nominees, screenwriters, Classic TV stars, voice actors, hit song writers and more! Here are just a few of the past guests we have had each week on On Screen & Beyond and go to our Reruns page to listen to all our past guest:

Click on the iTunes logo toget the latest podcast and each week you'll get the next episode of the show as soon as it is released! iTunes will automatically send them to you for free! And be sure to leave a comment about the show on iTunes...we'd love your support!